As police have militarized and increased their budgets, technology corporations have been their silent partners. These corporations help police expand surveillance and more seamlessly integrate with federal agencies, like ICE, the Department of Homeland Security, and the FBI. Amazon, in particular, is making itself central to policing and mass incarceration.

In 2018, Amazon bought Ring, a company that sells home surveillance devices, like doorbell cameras. As it grew a massive network of cameras in neighborhoods across the United States, Amazon started to form dangerous police partnerships.

In just a few years, Amazon integrated Ring into nearly 1,400 police departments across the country. As a part of the partnership, police promote Ring products and engage with Amazon’s neighborhood watch app, Neighbors. In exchange, Amazon provides police departments with an easy way to request and store footage from thousands of residents at one time––allowing for massive warrantless surveillance.

As we divest from policing, we must end these corporate-police partnerships and stop the expansion of surveillance.

"We must be painfully clear on two things. 1) Jeff Bezos is not an ally of the people rising up against policing, state violence, & militarism. 2) Despite their #BlackLivesMatter statements, Amazon’s ambitions don't include defunding the police or defending Black lives. For years, Amazon has aggressively sought out police partnerships while feigning ‘goodness’—dumping millions into high-profile PR endorsements and more. However—from powering ICE to partnering with police via their Ring video cameras to securing lucrative military contracts—it's clear that Amazon is a leader in powering state violence against Black, brown, immigrant, Muslim communities. "

"Amazon’s headlong plunge into the surveillance business has fueled a culture of 24-7 police monitoring that has put our most vulnerable communities at risk. As we scrutinize the dangerous role police play in perpetuating systemic racism, we need to take a deep look at Amazon’s collaboration with law enforcement and how that has sowed seeds of fear, mistrust and suspicion in our communities. Amazon claims to support the Movement for Black Lives but Ring technology is yet another tool for police to profile, harass and detain people. Amazon must now act on its words and stop sharing Ring data with law enforcement. "

"Amazon’s Ring offers the police unprecedented access to data recorded by its video doorbell devices, effectively bringing police surveillance to our front doors. This technology digitizes racial profiling while perpetuating the routine criminalization and over-policing that communities of color already face. Through Ring and its free reporting app Neighbors, Amazon is fueling its surveillance empire by stoking a false panic about rising crime and continues to weaponized racism to sell its surveillance products at the expense of the safety and dignity of communities of color. The issue of public safety should not be left in the hands of a tech company that privately automates the very discrimination that harms Black and brown communities. "

Amazon + Police surveillance partnerships function with no oversight or accountability. With Amazon’s help, cops have essentially installed surveillance cameras on all of our front doors, without public debate, despite endangering our rights and liberties.

Police can use the footage to conduct facial recognition searches, respond to reports of “suspicious” people, track protesters demanding an end to police violence and systematic racism, and even share it with other law enforcement agencies like ICE and the FBI.

With the end run Amazon provides, the police get access to user footage en masse without a warrant, probable cause, or judicial review. By extending its private surveillance empire to the police, Amazon poses a direct threat to our rights, our democracy, and the lives of Black and brown people.

Racial profiling is at the heart of Amazon Ring’s business model. In partnership with the police, Amazon profits from and therefore fosters a culture of racist fear mongering. And they actively work with police in a racially coded quest for ‘law and order.’ Policing dramatically exacerbates the criminalization of Black and brown people––further subjecting Black and brown people to repressive police violence and feeding a system of mass incarceration.

Pervasive video surveillance is particularly dangerous when integrated with facial recognition, which can be used to identify and track people, their whereabouts, and their social interactions.

For years, Amazon marketed its dangerous facial recognition software, Rekognition, to its police partners. Amazon knew police were using this technology incorrectly and without public oversight, and they knew that Rekognition disproportionately misidentifies Black and brown people, transgender people, and women—but, they refused to stop.

After intense pressure on Amazon and nationwide protests against police violence, Amazon announced a one year moratorium on police using Rekognition. However, Amazon can continue research and development on Rekognition and continue to grow partnerships with federal law enforcement agencies.

After the murder of George Floyd millions of protesters took to the streets to oppose police violence and systematic racism. Cops used heavily invasive surveillance tools to identify, track, and even arrest activists exercising their First Amendment rights.

Their partnership with Amazon gave them unprecedented access to request footage en masse without probable cause. In doing so, Amazon helps police subvert the Fourth Amendment by giving them backdoor access to mass surveillance networks without a warrant.

The police could use footage and facial recognition software from Amazon’s dragnet to track down protesters they were targeting, as well as share it with other agencies, like the DEA, that were tasked with suppressing protests and intimidating protestors. This kind of power without accountability threatens our basic civil rights.

While activists call for the defunding of police forces, Amazon is doing everything they can to solidify themselves as an extension of law enforcement. They throw special high-dollar parties for the police with special guests like Shaquille ‘Shaq’ O'Neal. They make large donations to police foundations across the country and they’re constantly researching new ways for their technology to be at the center of policing.

Amazon has experimented with a feature for 911 calls to trigger Ring doorbell cameras to wake up and live stream for police use. There are reports of Amazon forming a partnership with Axon, a company that produces TASER shock devices and body cameras for police.

Amazon creates dangerous technology marketed to make policing faster, cheaper, and more efficient in social control. This automated surveillance technology enables mass scale policing that can monitor everyone everywhere. The algorithms become more efficient in racist, discriminatory policing as they learn to sift through mass amounts of data to find the information police are more likely to use. Amazon’s surveillance empire will only solidify the police state.

Amazon Neighbors, a neighborhood watch app, lets people upload footage from their Ring or other camera for anyone to see. All the posts on Neighbors are immediately categorized as ‘crime’ with the majority of the posts being tagged as suspicious, strange, or unknown people.

In encouraging people to self-police their neighborhoods based on identifying who belongs there or not, Neighbors facilitates the racial profiling and criminalization of Black and brown people––which is reflected in posts on the app.

Neighbors is set up to foster wide-spread paranoia and fear. Users are empowered by the app to surveil themselves and their neighbors. This massive network of organized self-surveillance threatens core democratic values and further entrenches the Amazon-police surveillance state.

END SURVEILLANCE IN YOUR CITY

Amazon is aggressively pushing surveillance partnerships and technology with local police departments in cities across the country. We've heard from multiple elected officials that they were not even aware the police department had entered into one of these partnerships or were using facial recognition software. Amazon has found the perfect way to help the cops increase policing without community input or oversight. We will not be co-opted into the United States of Amazon. Access the toolkit below to fight back in your local community. 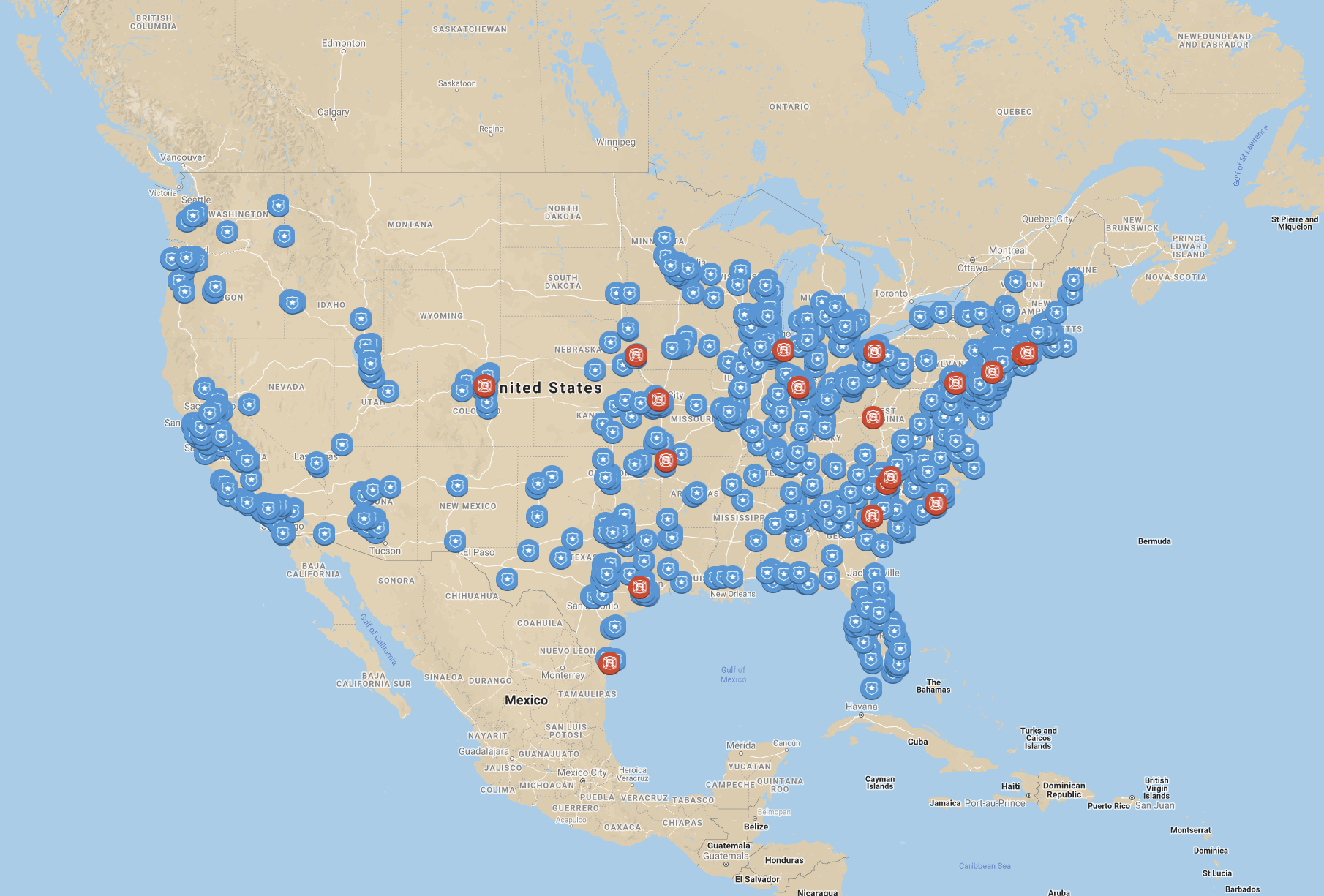